This is the start of the fourth generation of a random legacy.

Lily had bought a ticket to Aurora Skies – the small town where her father had grown up – and immediately set out to met the locals. 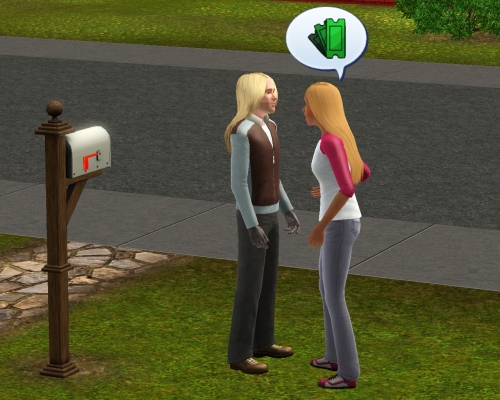 There she met a typical blue-eyed, blonde-haired Sim and was quick to fall in love. 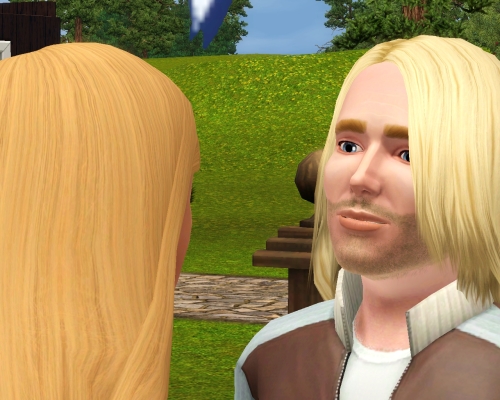 He had said he was single, but he didn’t mention that he had children – each with a different mother – until after woo hoo in one daughter’s bedroom with another daughter just beyond in a playpen in the hall, while the others were off on their own in town somewhere. Lily was appalled at his lifestyle and lax attitude toward parenting.

She took his children home with her when they finished doing whatever they were doing elsewhere and threw one of her father’s potent friendship potions at Karen. 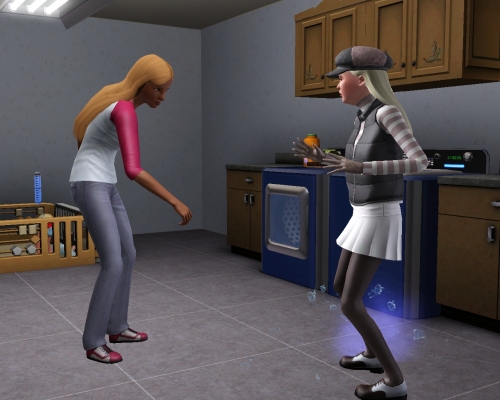 Then, she added a potion of potent bliss as well. 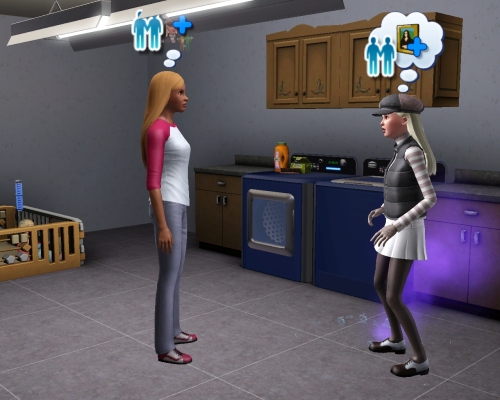 Karen was a teenager soon to transition to young adulthood, yet she’d not been taught to drive. So, Lily called a babysitter and hit the road with Karen.

Lily didn’t really like leaving the little one in a playpen, but learning charisma would be a great help later in life (and it was probably better to avoid contact with the babysitter.)

Just what was the agency thinking when they hired this young teen? Her sense of fashion leaves one wondering how much sense she does have. Though, maybe she’s a wonderful young lady with a great sense of humor.

After the driving lesson, there was homework to accomplish. Karen was just a mediocre student and needed lots of help.

That night as they all slept soundly in the gorgeous Moderately Modern home that ADWilson built, there was a magical display of lights…

With an even more magical, beautiful creature! Would this be a good omen?

Lief’s son Karl was quite gifted in logic skill and loved de-stressing after school by building things.

After raising his fun, Lily threw a jar of potent friendship at him as well.

While Karen helped her little brother Karl with his homework…

Lily took Kristin to the library to read with her. (After spending several hours and never finishing one book, they returned home.) 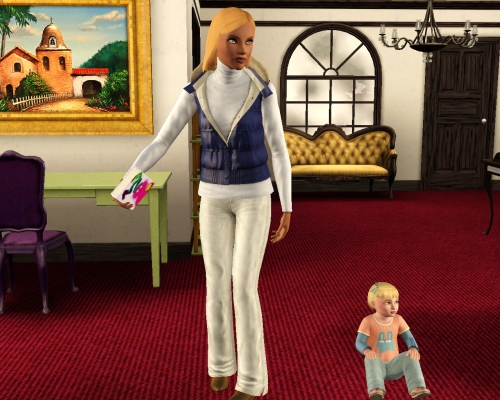 Kristin was tuckered out and ready for a nap. 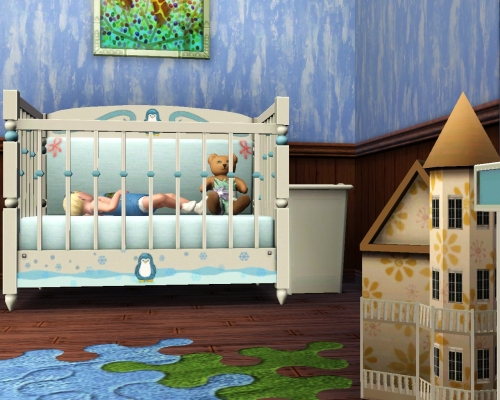 While Karl prefer block building, he did spend time making muffins in a toy oven. 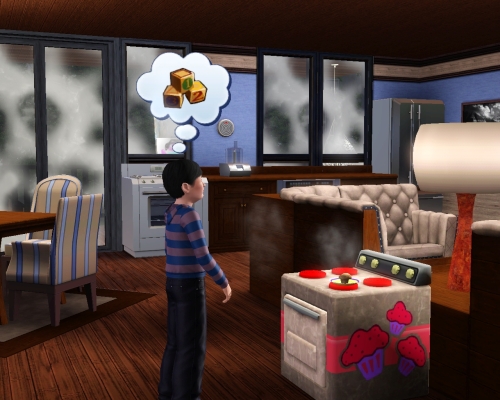 You may have noticed that this is a “hands off” generation, so Lily must get out and put back books for Kristin to read.

She doesn’t have to help with homework, but she likes doing it; so much so, she thinks of entering the education profession and helping lots of children learn.

While Kristin enjoys a bottle… 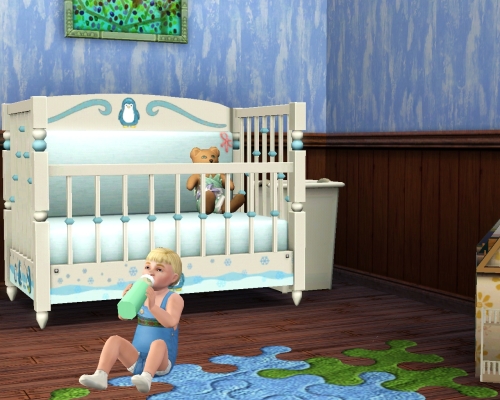 Then, Lily wonders if she is pregnant while she tackles the laundry and …

and Kristin tackles another story. 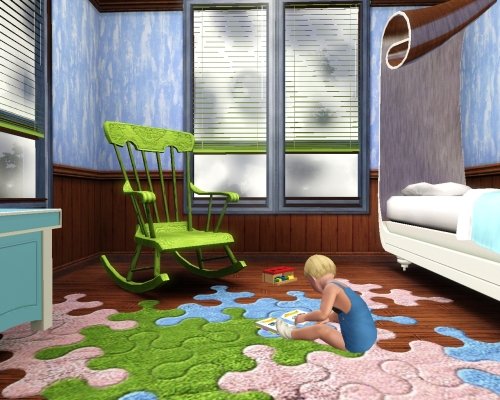 BUT Karen has just transitioned into a beautiful young adult who will be venturing out on her own right after graduation. 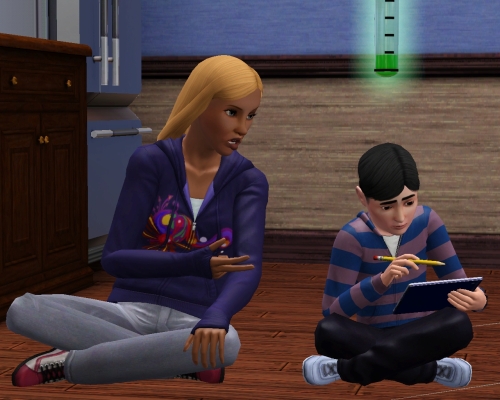 Then, it’s time for everyone to crawl into bed. 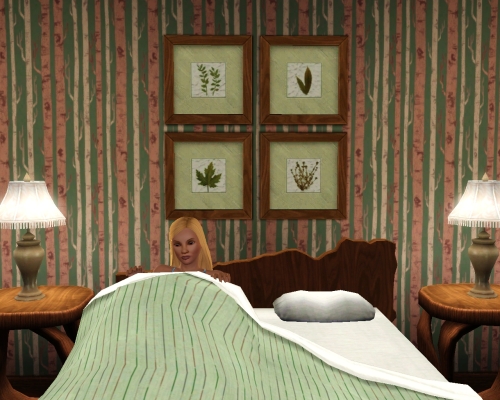 Karl sleeps in the old study where a bunk bed was added. He does think it’s more comfortable than sleeping on a park bench!

Karen sleeps in the nursery with her younger sister Kristin. Lily did buy her a more comfortable bed (after Error Trap reset Karen when using Icarus’ mod on the old bed threw an error). 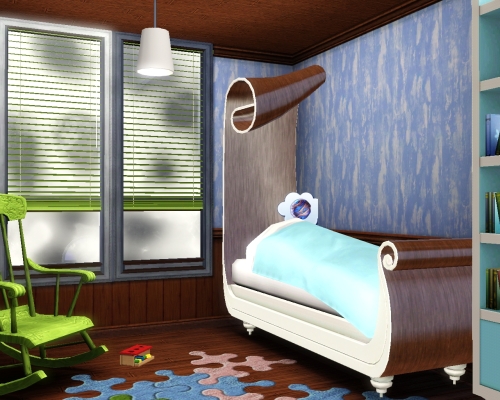 This is the home that ADWilson made. Isn’t it great? I love the compact, yet roomy layout. (I did rearrange a few things when trying to put the bunk bed originally in the nursery before thinking that three sims in one small room probably needed rethinking!) 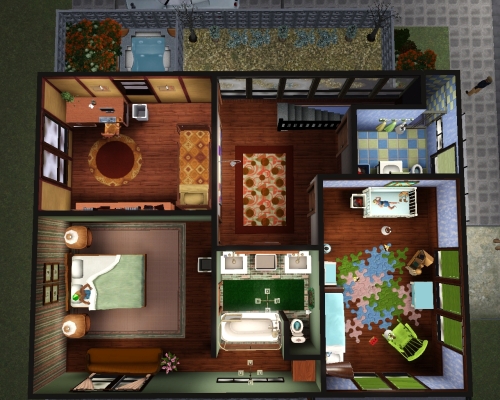 The easel was moved from the study to the deck, the table was angled, and the dominoes table was pushed against the wall to allow more maneuver room as the toy oven and chef’s fridge were added.

Downstairs, the laundry was moved into the garage to make room for the teleporter. A shower and hamper were added to the shed for cleaning up after gardening. Mia’s treasure chests were carried over in the move from Moonlight Falls. I also moved the stairs to allow more room at the base and added another front door. 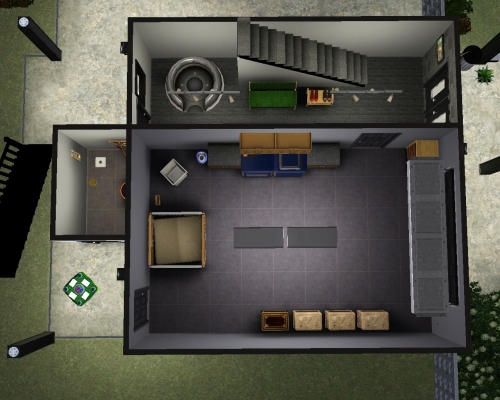 Outside I added another drive on the other side of the house that accommodates two cars.

It’s the perfect size home for compact living. I am loving it! Thank you so, so much for building this for me, Addy!

Next, we’ll say good bye to Karen and experience more growing up.