A small room was added on the side of the house because two bedrooms would never be enough for the family they planned. Then, all the gifts that hadn’t been left behind at the dorm were added to the home as well as the transporter that Kat was able to get when she achieved her LTW.

There were things to hang on the walls and planters to place around the house.

The planters out back seem a little out of place and need some flowers and shrubs added around them (or they need to be moved indoors later.)

The house, even with the small addition, just seemed to small for a family of six, so they got a basement dug out that added two bedrooms and another bath.

The second bedroom was made into a studio and the add-on will be a laundry room. With the exception of the bed, which was switched out for a more comfortable one, this layout reflects the way the house currently looks.

I think the addition looks great and provides a perfect stop to the driveway. 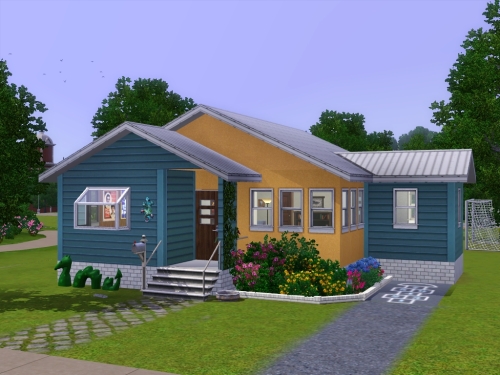 Tiberius and Kat wasted no time getting their dream jobs and then inviting Ashley over for a visit. Hopefully she’ll move in and the legacy will get started in earnest.